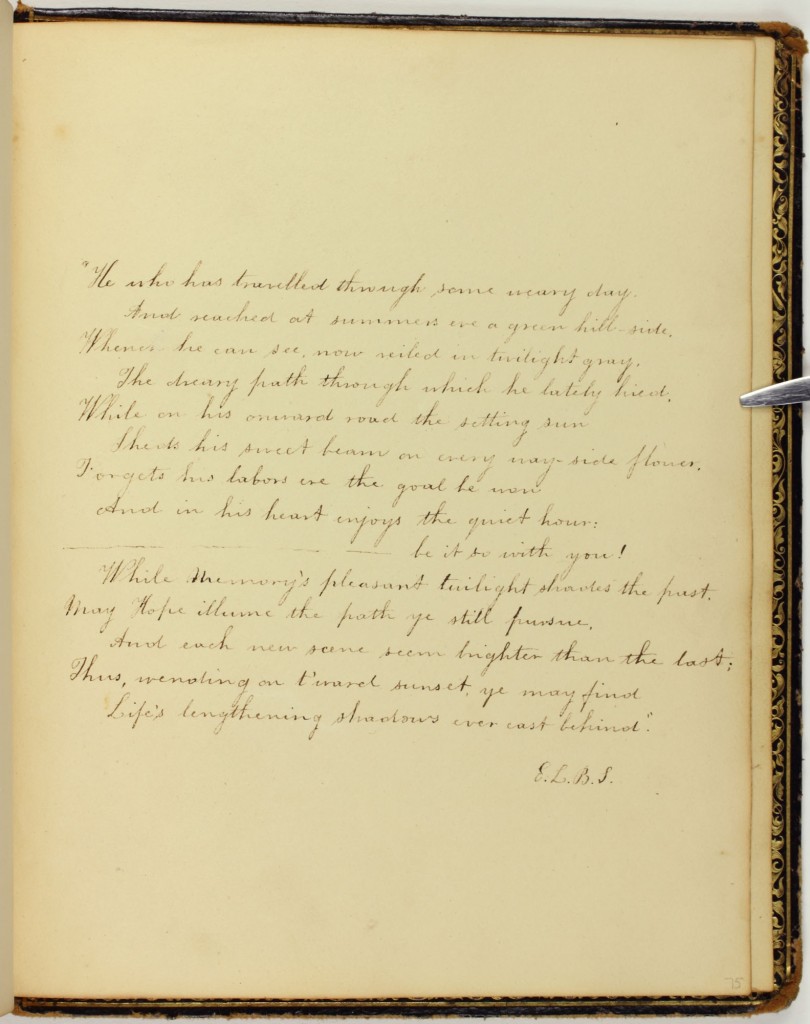 “He who has travelled through some weary day,
And reached at summers eve a green hill-side,
Whence he can see, now veiled in twilight gray,
The dreary path through which he lately hied [sic],
While on his onward road the setting sun
Sheds his sweet beam on every way-side flower,
Forgets his labors ere the goal be won,
And in his heart enjoys the quiet hour:
—be it so with you!
While Memory’s pleasant twilight shades the past,
May Hope illume the path ye still pursue,
And each new scene seem brighter than the last;
Thus, wending on t’ward sunset, ye may find
Life’s lengthening shadows ever cast behind.”
E. L. B. S.

Although the author of the last-placed contribution in the Cassey album provides their initials, his or her identity and the date of the entry are unknown. The transcribed original poem “He who has travelled through some weary day” was written by white American poet Emma Catharine Embury (1806-1863). The only significant difference between the following transcription by E. L. B. S. and Embury’s poem is that the former has eliminated the words “Father and mother” before “be it so with you” implying a more general readership. The poem features an optimistic tone in which “the goal be won.” The individual has moved on from the “weary day,” in order to chart his own path and more readily appreciate the natural world around him. If the poem serves as an allegorical means to advocate an end to slavery, the flowers on this new “onward road” may connote the future generations of black individuals able to enjoy lives in which the “lengthening shadows [have been] ever cast behind.”

Page 75: Selected from a poem by Emma Catherine Embury in The Knickerbocker 7 (New York: Clark and Edson, 1836).