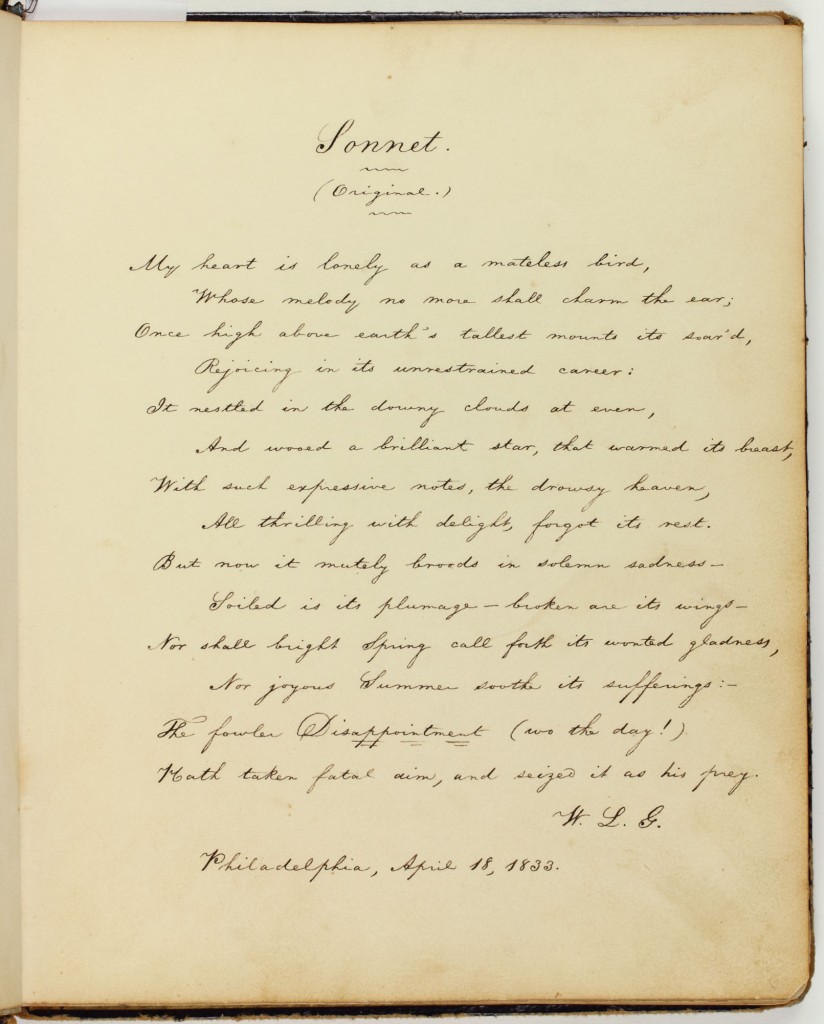 Sonnet.
(Original.)
My heart is lonely as a mateless bird,
Whose melody no more shall charm the ear;
Once high above earth’s tallest mounts its soar’d,
Rejoicing in its unrestrained career:
It nested in the downy clouds at even,
And wooed a brilliant star, that warmed its breast,
With such expressive notes, the drowsy heaven,
All thrilling with delight, forgot its nest.
But now it mutely broods in solemn sadness—
Soiled in its plumage—broken are its wings—
Nor shall bright Spring call forth its wonted gladness,
Nor joyous Summer soothe its sufferings:—
The fowler Disappointment (wo the day!)
Hath taken fatal aim, and seized it as his prey.
W. L. G.
Philadelphia, April 18, 1833

In this original poem, William Lloyd Garrison (1805-1879), writes about his heartbreak after a failed romantic involvement, apparently with someone from a higher social circle. In this poem, Garrison’s heart is represented as a bird that is violently and irrevocably damaged after an unrequited romantic pursuit. The Greek myth in which Icarus meets his demise by flying too close to the sun to woo a star may have inspired Garrison’s bird metaphor. The bird and the star are from different worlds and can never be together and possibly represent the different social circles of Garrison and his unrequited love.

The allusion that the metaphorical bird “forgot its nest” further suggests that Garrison left behind his old social stratum. In the process, “soiled in its plumage—broken are its wings—.” The line, set off by dashes, is itself broken text visualizing the poet’s broken heartedness. Furthermore, the poet’s disappointment is described as a “fowler,” a type of shotgun from the 1800s used to hunt fowl, showing how violent the experience of rejection was for Garrison.

Original. Copied from Garrison’s own column in The Liberator January 15, 1831, 4.