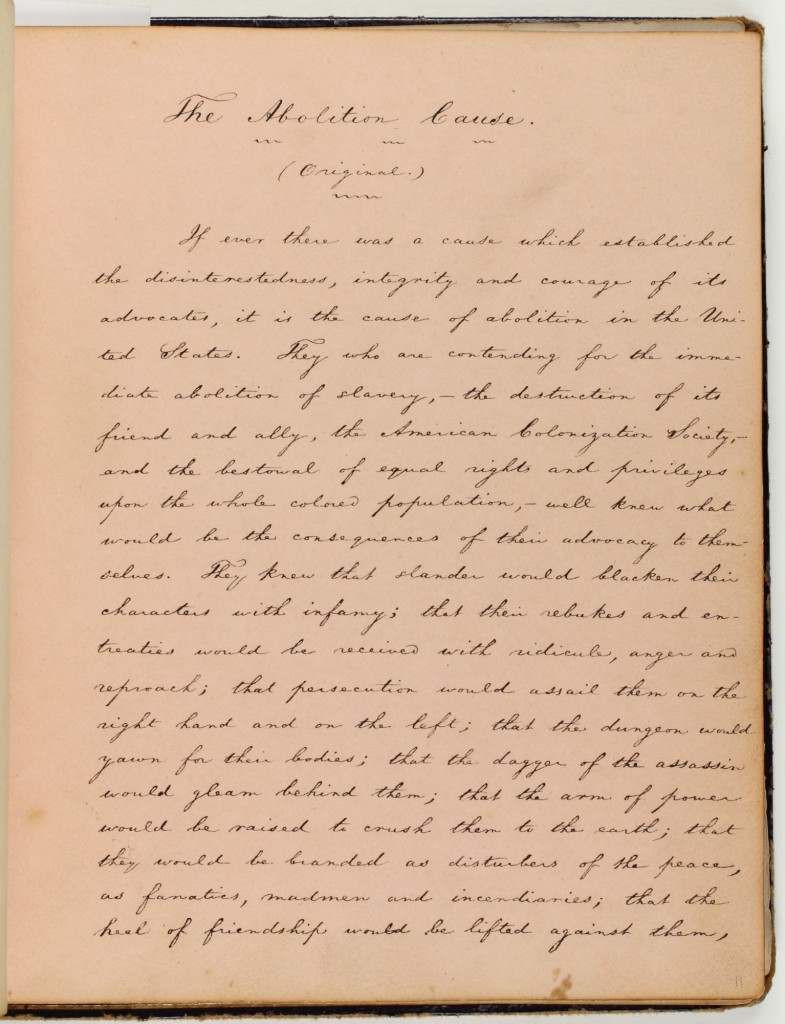 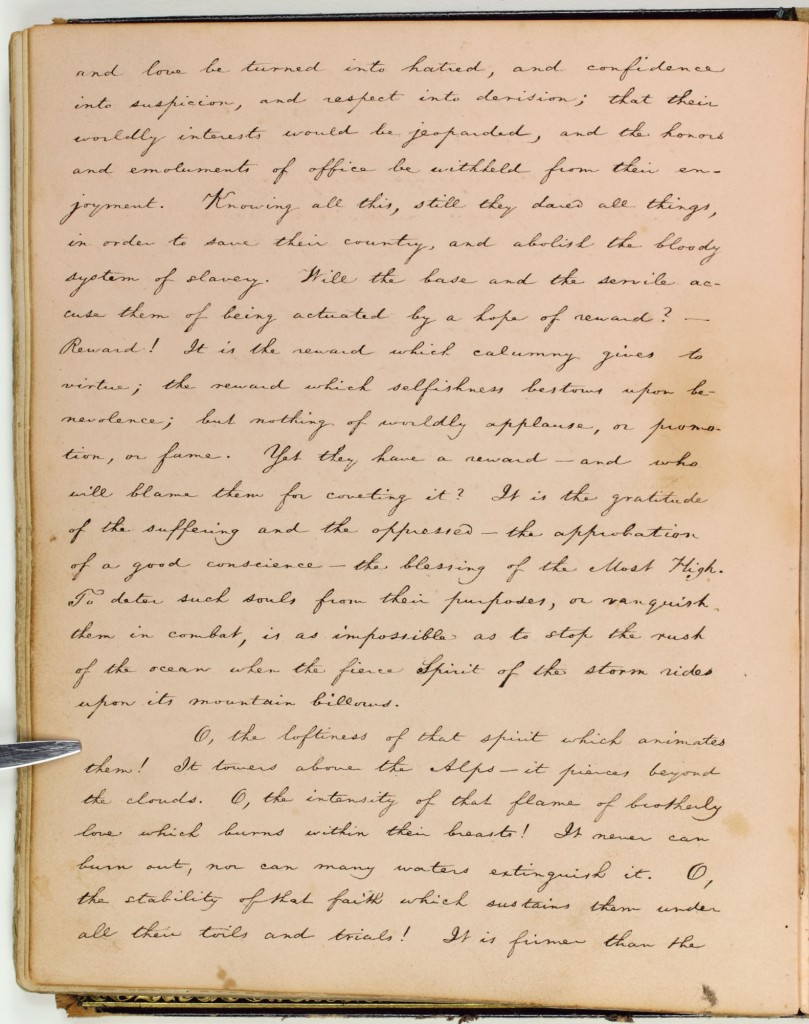 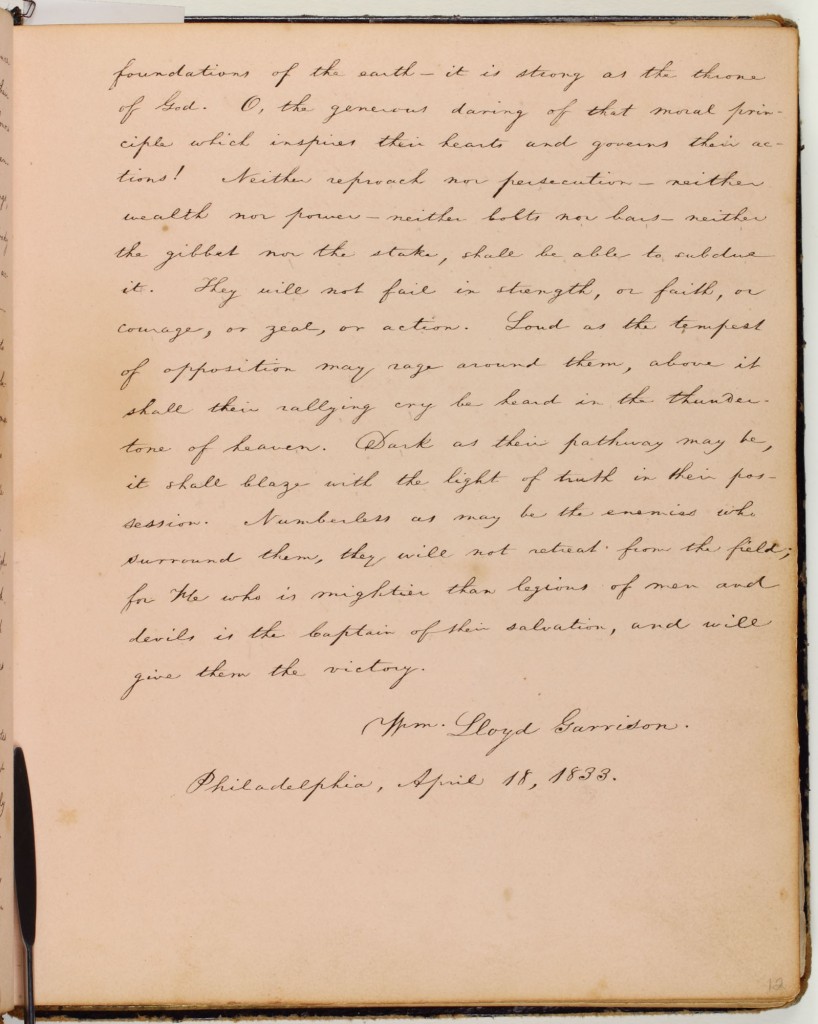 The Abolition Cause.
(Original.)

If ever there was a cause which established the disinterestedness, integrity and courage of its advocates, it is the cause of abolition in the United States. They who are contending for the immediate abolition of slavery, – the destruction of its
friend and ally, the American Colonization Society, and the bestowal of equal rights and privileges upon the whole colored population, – well know what would be the consequences of their advocacy to themselves. They knew that slander would blacken their characters with infamy; that their rebukes and entreaties would be received with ridicule, anger and reproach; that persecution would assail them on the right hand and on the left; that the dungeon would yawn for their bodies; that the dagger of the assassin would gleam behind them; that the arm of power would be raised to crush them to the earth; that they would be branded as disturbers of the peace, as fanatics, madmen and incendiaries; that the heel of friendship would be lifted against them,
[11 reverse] and love be turned into hatred, and confidence
into suspicion, and respect into derision; that their worldly interests would be jeoparded, and the honors and emoluments of office be withheld from their enjoyment. Knowing all this, still they dared all things, in order to save their country, and abolish the bloody system of slavery. Will the base and the servile accuse them of being actuated by hope of reward? – Reward! It is the reward which calumny gives to virtue; the reward which selfishness bestows upon benevolence; but nothing of worldly applause, or promotion, or fame. Yet they have a reward – and who will blame them for coveting it?
It is the gratitude of the suffering and the oppressed – the approbation of a good conscience – the blessing of the Most High.
To deter such souls from their purposes, or vanquish them in combat, is as impossible as to stop the rush of the ocean when the fierce Spirit of the storm rides upon its mountain billows. O, the loftiness of that spirit which animates them! It towers above the Alps – it pierces beyond the clouds. O, the intensity of that flame of brotherly  love which burns within their breasts! It never can burn out, nor can many waters extinguish it. O, the stability of the faith which sustains them under all their toils and trials! It is firmer than the
[12] foundations of the earth – it is strong as the throne of God. O, the generous daring of that moral principle which inspires their hearts and governs their actions! Neither reproach nor persecution – neither wealth nor power – neither bolts nor bars – neither the gibbet nor the stake, shall be able to subdue it. They will not fail in strength, or faith, or courage, or zeal, or action. Loud as the tempest of opposition may rage around them, above it shall their rallying cry be heard in the thunder tone of heaven. Dark as their pathway may be, it shall blaze with the light of truth in their possession. Numberless as may be the enemies who surround them, they will not retreat from the field; for He who is mightier than legions of men and devils is the Captain of their salvation, and will give them the victory.
Wm. Lloyd Garrison.
Philadelphia, April 18, 1833.

This entry is by the noted abolitionist William Lloyd Garrison. The piece is original, but many of the sentiments are not. In one of the longest pieces of this album, he honors the efforts and the resolve of those fighting to end slavery. Despite the title, this is not so much a defense or endorsement of the abolition cause, but rather an exaltation of the people involved and an acknowledgement of the personal sacrifices they have made.

The nature of this piece in the context of this album is manifold. Might it be an implicit praise of Amy Cassey’s efforts as an abolitionist? Or perhaps it is intended for other eyes as well, and hopes to spur them into action. Finally, we cannot ignore Garrison’s final statement that God will assure the cause’s victory. With his certainty that they will triumph, Garrison ends by giving both hope and divine sanction to those who fight for change.