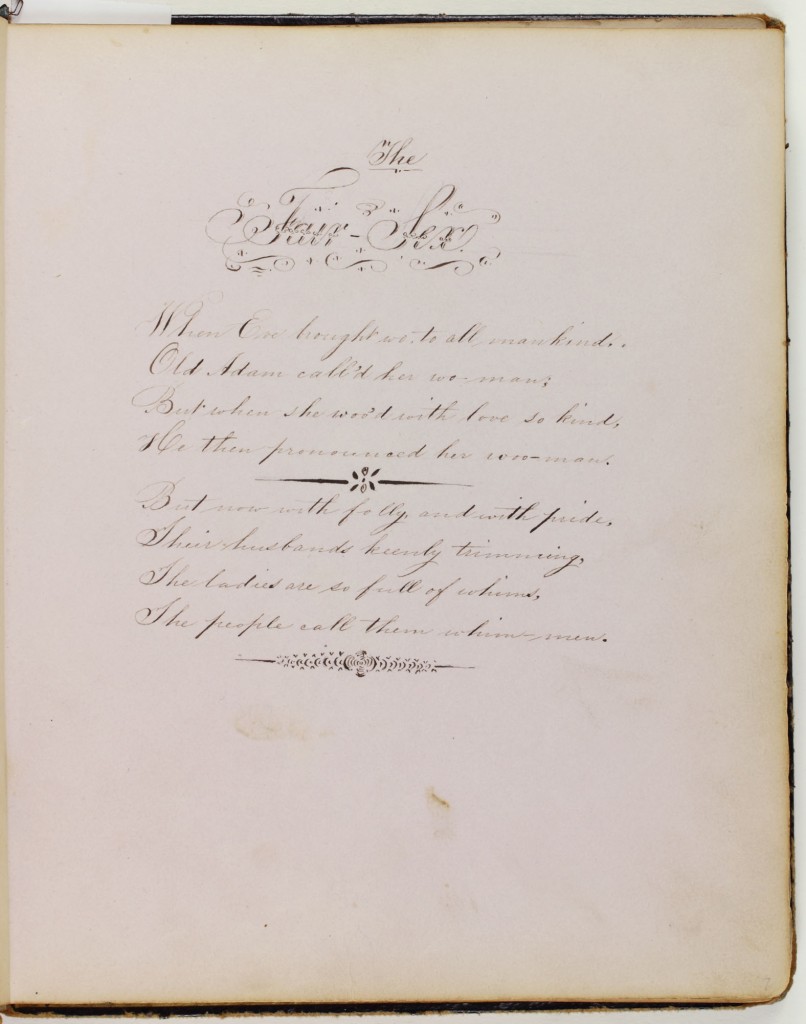 The
Fair Sex
When Eve brought wo to all mankind,
Old Adam call’d her wo-man;
But when she woo’d with love so kind,
He then pronounced her woo-man.
But now with folly, and with pride,
Their husbands keenly trimming,
The ladies are so full of whims,
The people call them whim-men.

This unsigned entry transcribes an unattribued published epigram using puns. The poem satirizes the casual patronization of women in antebellum U.S. In this poem, the Biblical story of Adam and Eve is referenced to suggest that women are fools lacking in common sense. By succumbing to the Devil’s temptation, Eve caused not only herself, but Adam to be exiled from the Garden of Eden. Thus, the poem expresses annoyance at how woman “brought wo to all mankind” by being filled “with folly” and “whims.”

The humorous form of the poem and absurdity of its fake etymology of the word “whim-men” reinforces the view that although women may have brought pain and destruction to mankind, they did it out of ignorance and senselessness. Therefore, there is a comical element as though recounting the misdeeds of a child. The comical element combines with the poet’s annoyance at women to reinforce a clearly degrading portrayal. According to the poet, the one redeeming characteristic of women is that they can “woo [men] with love so kind.” However, this redeeming characteristic actually furthers the demeaning quality of the poem because it indicates that women are subservient to men.

Transcribed. Unattributed, The New Monthly Magazine and Literary Journal (April 1830). Reprinted in The New England Farmer 8, 376; The New York Mirror: A Weekly Gazette of Literature and the Fine Art  7, 388; and The Schenectady Cabinet  20, 1.