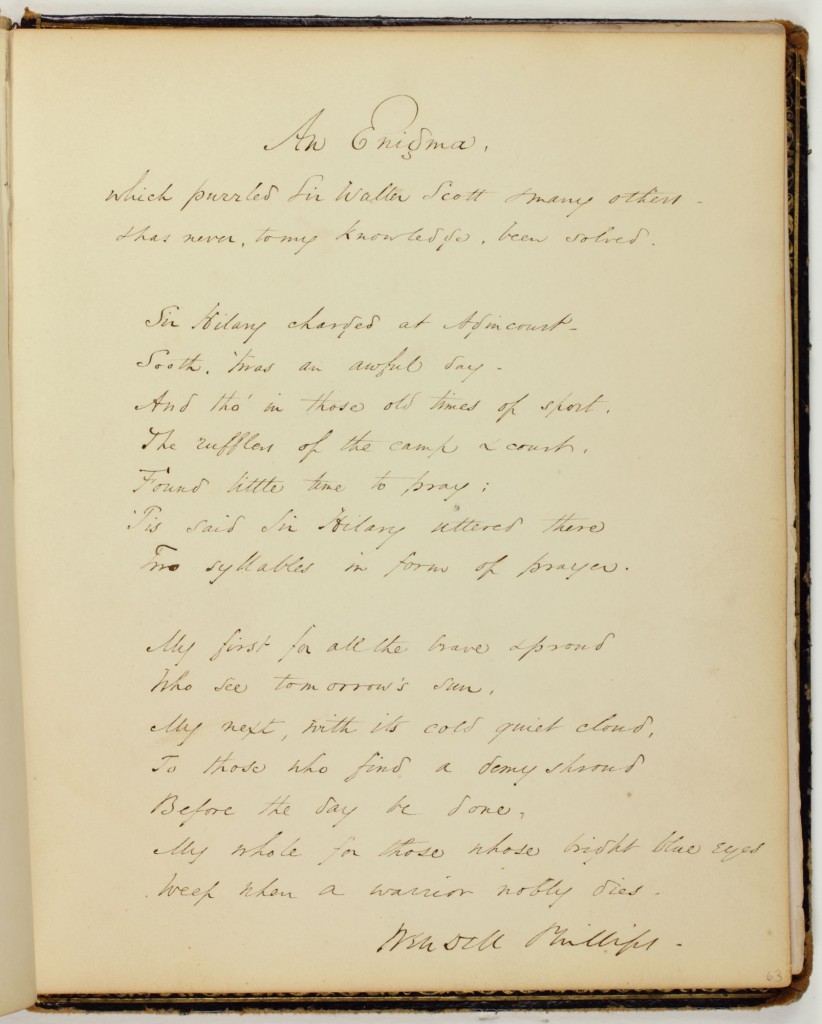 An Enigma,
which puzzled Sir Walter Scott & many others
& has never, to my knowledge, been solved.

Sir Hilary charged at Agincourt-
Sooth, ‘twas an awful day –
And tho’ in those old times of sport,
The rufflers of the camp & court,
Found little time to pray;
‘Tis said Sir Hilary uttered there
Two syllables in form of prayer.

My first for all the brave & proud
Who see tomorrow’s sun,
Up next with its cold quiet cloud
To those who find a demy shroud,
Before the day be done
My whole for those whose bright blue eyes
Weep when a warrior nobly dies.

Copied by Boston abolitionist and orator Wendell Phillips, the poem “An Enigma” circulated in numerous periodicals in the early to mid-19th century. Phillips’s friendship with William Lloyd Garrison and his involvement with the Philadelphia Female Anti-Slavery Society likely led to his contribution. Phillips advocated the unconstitutionality of slavery and after the passage of the Fifteenth Amendment, he would support women’s suffrage and citizenship efforts for Native Americans.

As a riddle, the poem requires the reader’s concerted attention. Beginning with a reference to the 19th-century Scottish historical novelist Sir Walter Scott, the poem jokingly suggests that the answer is one that even a great historian cannot solve. This tone alludes that the answer is more emotional than factual. The poem tells us that the answer is two syllables. Three clues in the second stanza provide hints to the two-syllable answer. The first clue is that the first syllable invokes “all the brave & proud / Who see tomorrow’s sun.” The second clue says that the second syllable “with its cold quiet cloud” belongs to “those who find a demy shroud.” The final clue is that “My whole for those whose bright blue eyes / Weep when a warrior nobly dies.” The most suggested answer has been Good (k)night.