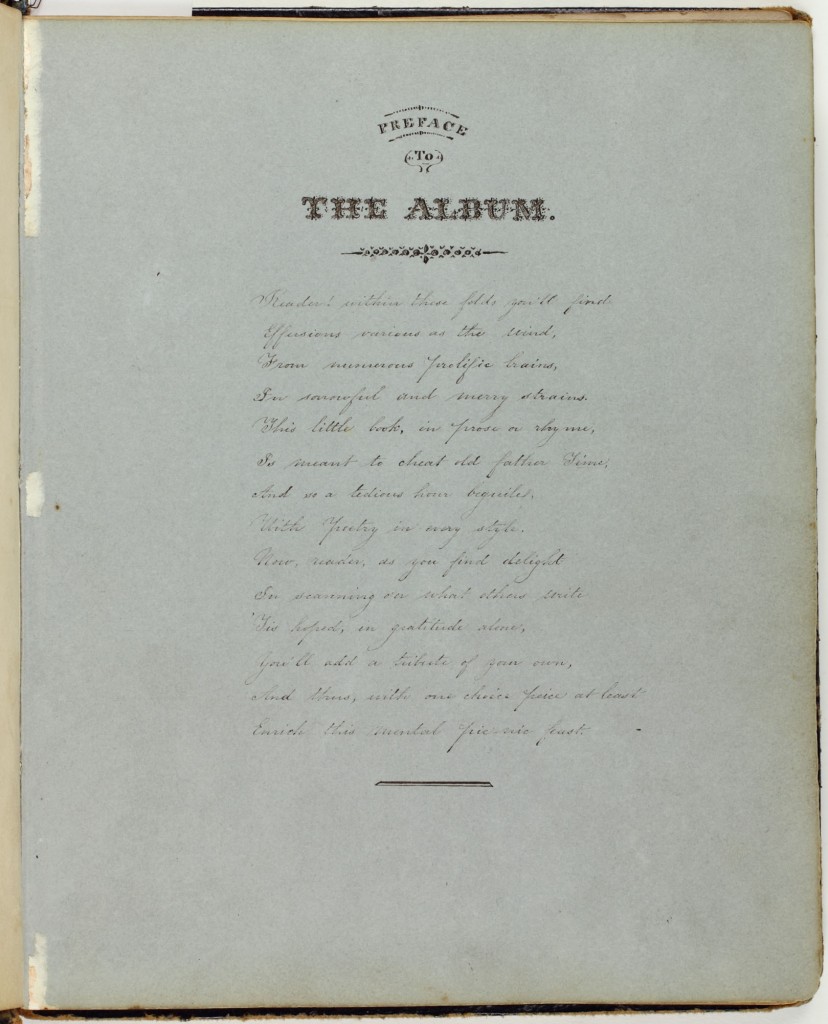 PREFACE
To
THE ALBUM
Reader! within these folds you’ll find
Effusions various as the Mind,
From numerous prolific brains,
In sorrowful and merry strains.
This little book, in prose or rhyme,
Is meant to cheat old father Time,
And so a tedious hour beguiles,
With Poetry in every style.
Now, reader, as you find delight
In scanning over what other write
‘Tis hoped, in gratitude alone,
You’ll add a tribute of your own,
And thus, with one choice piece at least
Enrich this mental pic-nic feast.

The family background of Amy Matilda Cassey (1809-1856), daughter of the prominent African American Episcopalian minister and abolitionist Peter H. Williams Jr., pervades her introductory poem to her album. Promoting a communal discourse, Cassey describes the varied content as a “mental pic-nic feast.” The group participation in a picnic feast is similar to the group participation necessary for a friendship album. This metaphor comparing the album to a recreation reliant on food indicates that the album is supposed to provide sustenance for the mind by fueling the reader’s thoughts. The requisite sharing of thoughts within a defined community involved in this “mental pic-nic” means that, as Erica Dunbar writes, the Cassey album is a “semipublic” venue of discussion.

In addition to providing a semipublic venue of discussion and mental sustenance, Cassey purports her album provides a pastime, while also establishing membership within her social circle. When Cassey writes that the album is supposed to “cheat old Father Time” and “a tedious hour beguile,” she establishes that the album should be a pastime that breaks the reader’s boredom. The mental pic-nic feast metaphor that Cassey employs indicates that her friendship album represented a means for leisure and intellectual pursuit, and thus was typical of fashionable society. Aside from providing a diversion like a picnic would, penning a piece in the album alongside the writing of prominent contemporaries like Frederick Douglass, William Lloyd Garrison, and Sarah Mapps Douglass would have granted the contributor some degree of social prestige. Consequently, an entry in in the Cassey album paralleled membership in the upper ranks of the Philadelphia black bourgeoisie.

Original. Also appears on page 8 of Martina Dickerson’s album under the title “The Album.”The Dickerson entry is undated and signed by J.F., possibly James Forten or James Forten Jr. The Cassey entry likely predates the Dickerson one given the earliest dated contributions in the Cassey album. Additionally, presuming Cassey wrote the preface before circulating her album, the poem was composed at the latest in 1833.